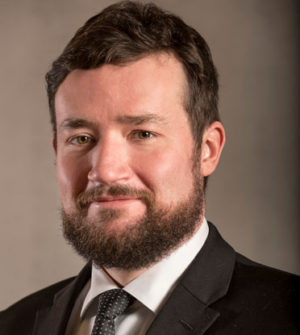 Ryan works on a diverse array of issues at the local and statewide level. Some examples of which include acupuncture, healthcare, automobile dealers, higher education and telecommunications. Ryan has also worked on local and national political campaigns developing campaign strategy.

Prior to joining Shenker Russo & Clark, Ryan held the position of District Director for the Office of Congressman Paul D.Tonko (NY20). In that role, he oversaw all district office operations, including casework, scheduling, outreach, strategic planning and administrative duties for seven district staff members and three district offices. He worked closely with the Congressman and the Washington, DC office to engage constituents and community leaders.

Before working for the Congressman, he was an Associate Attorney with Wilson Elser’s Government Affairs practice area where he serviced a variety of clients before the State of New York. He researched various public policy matters and drafted numerous pieces of suggested legislation and rules, as well as many advocacy documents.

Ryan has also served as a County Legislator for the County of Albany, New York Representing the 25th Legislative District in the Town of Colonie, which included parts of Latham, Loudonville and Newtonville. He was the main sponsor of Local Law No. 8 for 2011, a new ethics and financial disclosure law for Albany County officials.