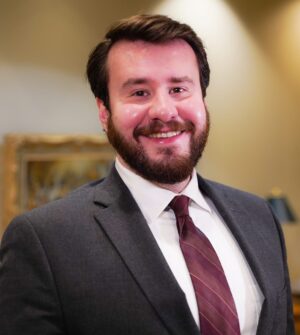 Philip Bolen is the Director of Public Policy for Shenker Russo & Clark. Prior to joining the firm, he served in the Albany office of Bolton-St. Johns for eight years.

He lobbied extensively on the New York medical marihuana program, as well as the full legalization of adult use cannabis. Major issues he has successfully worked on include securing 55 million dollars for direct care worker wage increases, securing 20 million dollars for legal aid services to prevent foreclosures, the creation of a multi-billion dollar state program to improve New York’s clean water infrastructure, and the restoration of Medicaid cuts to the state budget.

Prior to moving to Albany he worked in the Grants Division for Senator Schumer in Washington DC, focusing on research and constituent communication in the immediate aftermath of Hurricane Sandy. He also worked on Governor Kathy Hochul’s successful 2011 Congressional campaign, where he reached out to voters across Buffalo and Amherst.